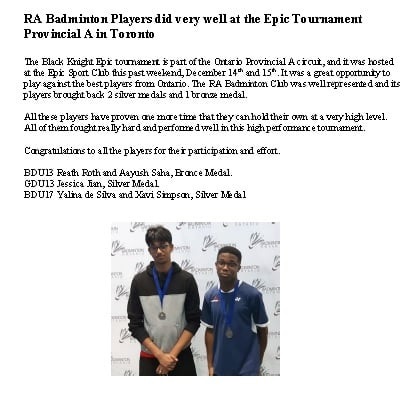 It’s been a busy summer at the RA. Just wanted to give you an update about the last season involving the high performance athletes, both senior and junior. Lots to cover, but if you’ve clicked on the link to get here in the first place, you are probably a keen badminton enthusiast! :) The RA players did well in the 2017-18 badminton season (from September 2017 to May 2018), really well, considering we are a tiny, sleepy town, compared to the giant metropolis of Toronto (where most of the top players are coming from these days).

Canadian Junior and U23 National Championships – May 2018

Jenny Lei, our top U19 girl made the quarter-finals, losing to Eliana Zhang of Montreal.

Kalie Rheaume, partnered with Samantha Hui from Montreal, made the U19 women’s doubles semis.

The full junior high performance group from the RA Badminton Club, made up of 40 athletes between the ages of 9 and 17, descended upon two venues in Gatineau last weekend, to compete in the Omnium de Gatineau, a Quebec provincial circuit tournament.

This was the first major tournament of the season for the RA crew, and a big challenge,

having to face off against the very best athletes from Quebec.

We are incredibly proud of how the athletes performed,especially considering how many of the most successful ones weren’t “contenders” going into the tournament.

The next big event for the RABC team will be the Quebec Junior Elite Series tournament, again held in Gatineau, from Jan 19-21.

The first big tournament for the RA Badminton Club's high performance program took place at the Cejep de Gatineau, from Friday Nov 18 to Sunday Nov 20th.  Almost all of our juniors (totals 40 across 3 groups: HP 1, 2 and 3) participated, making for a very busy 3 days for Javier and Andrew, not to mention for the kids themselves!  It was a successful weekend.  We were thrilled with the performances of the players, most of whom played to their potential.

By Sunday, we had 5 athletes/pairs competing in finals.  The final results were:

Congratulations to these athletes, and the others who had fine performances!

The next big tournament for this group will be a bigger challenge, but also a great experience,

the Quebec Junior Elite Series event, also held in Gatineau, from Jan. 13-15th. Many of the best players in Canada will participate, so our juniors will have to continue to train hard if they want to do well!  But we think they are up to the challenge!

A massive contingent of juniors (35) from the RA Centre attended a Quebec provincial junior tournament in Gatineau this past weekend (Nov 13-15, 2015). Thirty-six out of forty of the juniors in our HP program were in attendance, competing across four age divisions: U13, U15, U17 and U19. For the most part, our athletes had stellar performances. By Sunday, we had representation in 8 finals! In the end, we only came away with 2 wins, but it was a success nonetheless.

The winners and finalists were:

The next big event for our high performance group will be a Canadian elite series junior tournament, again in Gatineau, from January 23rd to 25th, 2016. We are pumped about this (as are the kids), and we will work hard to do well there!